The modern UFO era started in 1947 with Kenneth Arnold, who spotted nine shiny objects in the sky while flying his single-engine airplane near Mount Rainier in Washington. He said the objects were flying in “V” formation and looked like “a saucer if you skip it across water.” The press called the objects “flying saucers,” and here we are.

The convergence of the Bible and UFOs appears almost immediately after the widespread publication of Arnold’s story, mostly within the Christian Dispensationalist community (end times believers), which thrived during the anxious heat of the Cold War. Here Rev. Louis Gardner espouses the theory that UFOs are modern-day miracles (“signs and wonders”) meant as a warning from God. (Here’s another article about a different Reverend citing UFOs as a prelude—“the Son of man coming in the clouds with great power and glory“—to the Second Coming.)

Gardner wrote to Einstein in July 1952 asking what the latter thought of UFOs, and Einstein’s response made quite a stir in the press at the time. The letter is below. That’s Gardner on the left. 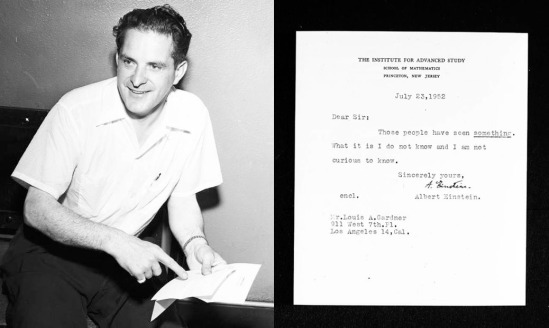