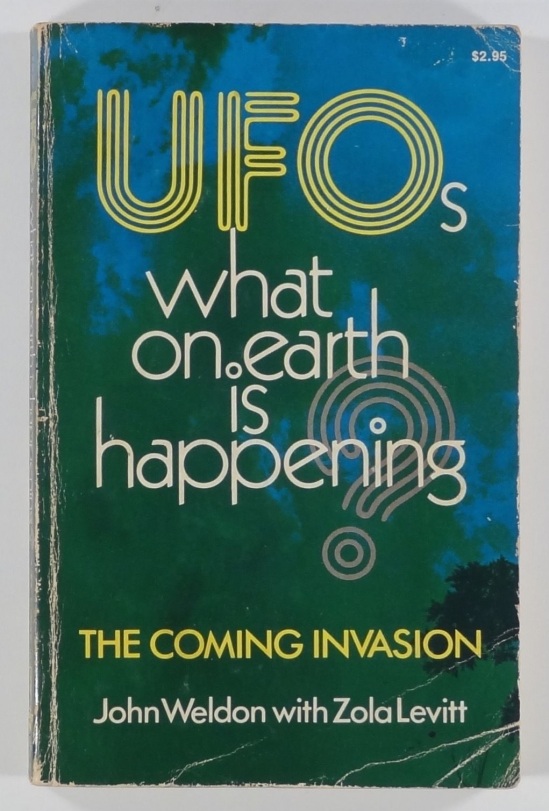 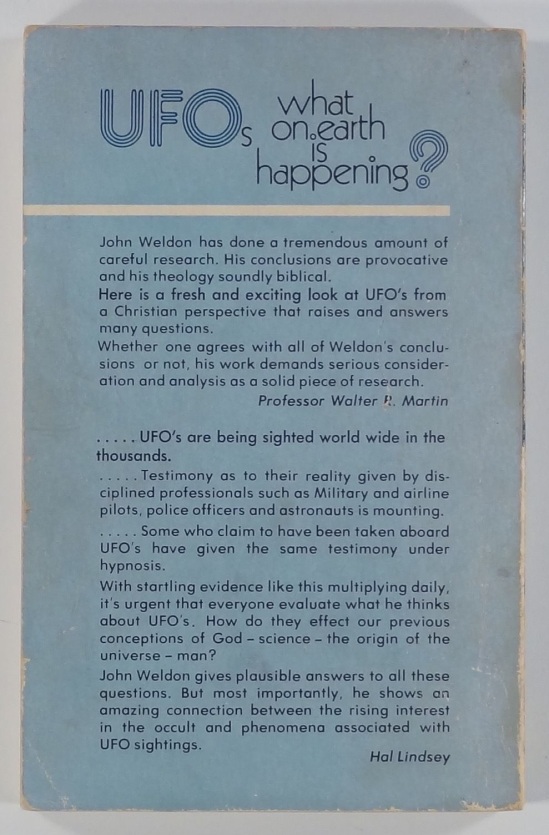 Weldon and Levitt, both working within the Christian dispensationalist tradition, wrote several volumes together and separately covering various occult and metaphysical topics, including UFOs, psychic phenomena, life after death, and the end of the world as we know it. Their main thesis in UFOs: What on Earth is Happening?, based on this 1975 talk by Levitt, is that UFOs are extraterrestrial only in the sense that they are commanded by demons from hell who are preparing the Earth for the ultimate “battle of the spirits” and the coming of the Antichrist. Overall, it sounds like a Christian interpretation of John Keel’s Operation Trojan Horse (1970), a founding ufology text linking UFOs and their “ultraterrestrial” pilots to the supernatural monsters and “trickster” spirits that people have reported encountering throughout recorded history.

The “students of the Light and Power House,” to whom the book is dedicated, refers to an experimental Christian ministry founded by Hal Lindsey in 1970 (note Lindsey’s blurb on the back of the book), the same year Lindsey wrote the bestselling (28 million copies by 1990*) The Late, Great Planet Earth (1970), detailing his end times prophecies. The Light and Power House, based at the UCLA campus,

embodied the swirling milieu of evangelical activism, countercultural sentiment, and the search for meaning in terms of Christ’s word. It offered hippies and druggies a place to crash… [Lindsey’s] students grew their hair long, wore tie-dye, and spoke the language of the counterculture.*

The general embrace of occultism at the time was seen by Lindsey and other evangelicals as yet another sign of the corruption and decadence indicative of the “great tribulation” preceding Christ’s kingdom without end.

UFOs: What on Earth is Happening? was reissued later in 1975 as Encounters with UFOs.

I have so many weird and lovely paperbacks at this point, ranging from the worst kinds of hack jobs to surprisingly erudite ruminations buried in sensationalistic packages, and I haven’t even begun to get a long view of the whole picture. My aim for now is to (1) post the front and back covers and review the books I have read, and (2) post the front and back covers of everything I want to read so that, at the very least, there’s an ongoing catalog. If I haven’t read the book, I’ll try to piece together what I can from available information, as above.

When it comes to title, author, publisher, and publication date, I go with WorldCat.

4 responses to “UFOs: What on Earth is Happening? by John Weldon and Zola Levitt (Harvest House, 1975)”